Hotchkiss in the Early Days 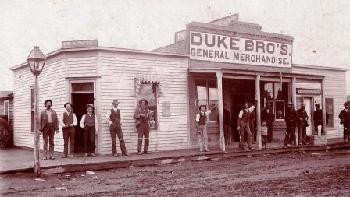 The first recorded prospective settlers into the North Fork were a small group of men from the Lake City area led by Enos Throop Hotchkiss in 1880.
Hotchkiss also reportedly scouted the area on his own the year before.
His party surreptitiously scouted the valley since it was technically illegal to be there, picking out likely homesteads while the Utes were still in possession.

The next year, in September of 1881, when it was legal, Hotchkiss returned with two young brothers, George and William Duke, a herd of 200 horses and David Platt, Samuel Wade, Samuel Angevine, and William Clark.  They were the first into the valley as legal settlers.
Photo at right---Duke Bro's General Merchandise 1903.

David Swendt, the town's first blacksmith who arrived with the first family, had the two-block area north of Main Street west to Cedar, approximately.
He donated the land for the first proper school, which was on the site of the present Hotchkiss Town Hall.
Photo at right:  David Swendt and family. EARLY HOMES
Most of the early homes were log and were cut from cottonwood trees.
The floors of the early houses were simple—sand and dirt mixed.  The cracks between the logs were filled with adobe mud, and the walls were covered with newspapers, sometimes put on upside down which made it hard to read them.  For light some of the old timers used coal oil, while other used candles of deer tallow.
House flies and mosquitoes were troublesome pests.  The housewife swatted flies with a box elder tree branch.  A smudge fire of rotten cottonwood oak took care of the mosquitoes.
Bedbugs were a constant nuisance, so they were doped with coal oil and cedar oil.  The Garrison Brothers, Charlie and Roy, lived in a log home that caught fire.  It was burning rapidly and Roy shouted to Charlie, “Let ‘er burn!  At last we sure will be rid of those bedbugs!”


The Hotchkiss/Crawford Historical Society Museum has entertaining and educational exhibits.
It is located at 180 South Second Street in Hotchkiss, less than one block south of Bridge Street (Highway 92).
Hours:  Saturdays from 1-4 from September through mid-May.
During the summer months it is open Fridays, Saturdays and Sundays from 1-4.
Appointments and tours can be arranged by calling the Museum at 970-872-3780.
To learn more about the Museum, please read the Museum's page on our North Fork Valley website or visit the Museum's website: http://hchm.freehostia.com
Text provided by Tom Wills and Kathy McKee.
Photos courtesy of the Hotchkiss/Crawford Historical Society Museum.